St John at Hackney Churchyard Gardens is a green space at the heart of Hackney accessed from Lower Clapton Road, the Narrow way, Sutton Place and Morning Lane.

It was a burial ground for over 500 years and has been managed as a park since 1894, undergoing many changes throughout its history – most recently in 2007 when it benefited from a £1.79 million HLF grant. It’s now a well-loved, quiet spot away from the busy shopping street it borders, with a popular children’s play area.

The park holds a Green Flag award. The awards are given to the best green spaces in the country and are awarded each year to make sure the quality of the green space remains high. 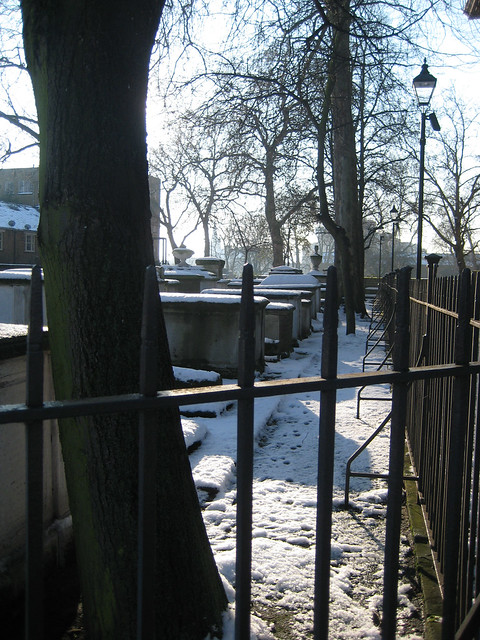 If you’d like to submit photos of the churchyard for inclusion on our Flickr gallery, please email them to parks@hackney.gov.uk.

Get Walking, Keep Walking includes St John at Hackney on one of its walking routes.

Barbecues are not allowed in St John’s Churchyard.

All dogs in the Churchyard must be on a lead at all times. More information on dogs in parks.

Keep up to date with Hackney parks

This park has had a long and complex history, and has undergone many changes over 700 years.

It has survived the transformation of Hackney from a small village to part of Europe’s largest capital, the coming of transport infrastructure, the disappearance of its local river, the demolition of its original church and its development into a well-loved green space.

The churchyard originally belonged to St Augustine’s Church, Hackney’s village church from at least 1275. All that remains of this old church now is the tower. The main building was demolished in 1798 when the “new” church of St John’s was consecrated. St Augustine’s was built on raised ground, close to Hackney Brook and was dedicated to the patron saint of the Knights Templar, St Augustine of Hippo, from the 14th century as they owned much of Hackney’s land until their suppression in the 17th Century. The old church changed its dedication to St John in 1660, when the Knights of St John took over from the Templars and Samuel Pepys came to hear the church’s famous organ in 1667.

In the 18th Century, Hackney’s population rapidly expanded due to the influx of city merchants and tradespeople. The church was too small to accommodate the growing congregation. It was extended but the traffic jams on Mare Street, and the overcrowded pews meant that a decision was made in 1789 to build a new church. The new St John at Hackney Church was designed to seat 2,000 people and was consecrated in 1797.

The new tower, built in 1814, wasn’t strong enough to bear the weight of the bells until it was strengthened 1854, so the old tower functioned as a belfry until then. The plan was always to demolish the tower once the bells were moved to St John’s, but by 1854, the population of Hackney was keen to retain its medieval tower for its cultural and historical value. It was sold to the Council in 1929, and has been managed by Hackney Historic Buildings Trust since 1990.

The churchyard was the centre of the village, so it was used for fairs, meetings and even sport, as well as burials. It was usual for a single cross to mark the burial area, and individual burials were not marked, as most people were illiterate. Originally, very wealthy people like landowners, the clergy and nobility were buried inside the church, with plaques or effigies to commemorate them. Some important memorials from St Augustine’s were moved to St John at Hackney, and can still be seen there, including memorials to:

When the burial space was full, the staff started burying the rich outside, close to the church. The area around St Augustine’s became full of burials too and the churchyard was extended. From the late 17th Century, more people wished to be (and could afford to be) memorialised with a tomb stone, and many 18th Century chest tombs, stones and ledgers exist in the churchyard.

Stonemasonry developed as it became more commonplace to be buried with a memorial, and the shapes of late 18th and early 19th century tombstones were influenced by art, architecture and furniture design of the period. The symbols found on many of the tombstones represent death (skulls), time passing (hour glasses with wings) and resurrection (winged cherubs), and rarely show overtly Christian symbols, which, after the Reformation, were considered too Catholic.

Wealthy families were buried together in vaults – some have as many as 13 people inside. Chest tombs were often classically-inspired, with Doric arches, Greek key patterns and Roman lettering. All Christians had a right to be buried on consecrated ground but there were many poor people whose graves went unmarked. Their names can be found in burial records that date back to the 16th century, held at London Metropolitan Archives, and on microfilm at Hackney Archives.

By the 1850s, the churchyard of St John at Hackney was full and apart from families with space left in the vault, no more burials took place. The churchyard became overgrown and fell into disrepair. In 1884 an act of parliament allowed disused burial grounds to be cleared to become parks in urban areas. It took 10 years for Hackney to adopt this idea and it was decided that the gravestones would be moved to create a green space in the by now very built-up urban environment. There were protests, but the move provided local unemployed men with work, and so went ahead.

The standing gravestones were stacked along the east and west walls, ledger stones were grassed over, and the churchyard became a park. Further work was done in the 1950s, and most recently a lottery grant was received in 2007 to improve the site, with lighting, CCTV, clearance of shrubs, the addition of a children’s play area, new benches and plantings and more even paving. Some tombstones were also restored. The churchyard is managed and cared for by the Council but remains consecrated church land.

There are many fascinating and important people buried at St John at Hackney Churchyard, who also help to tell the story of Hackney’s past and its place on the world map.  A place of royal connections, landed gentry, world voyagers and rulers of the Empire, Hackney’s fresh air, grand houses and good schools as well as its easy access to the City, made it a very attractive and popular place to live. The fact that people have been coming to and travelling from Hackney all over the world for centuries is reflected in the people buried here and connected to this site.

Most tombs and stones are hard to read now. The thawing frost of 200 winters has split the sandstone ones, and rain has corroded the Portland Stone ones. Porous stone also attracts mosses which cover many of the memorials. The best surviving are those made of granite.

Sir Thomas was an important city man, as Chamberlain of the city (finance director). We know they were extremely wealthy, not only from their coat of arms but also because they paid Hearth Tax on 14 hearths in their Hackney home. The earliest outdoor memorial – look for the ledger in the pavement on the west side of the tower, behind the old town hall.

Born Quakers, of Huguenot descent, the Beaufoys were cousins who ran away to marry at Gretna Green in 1784. Mark Beaufoy was an astronomer and physicist who became the first Englishman to climb Mont Blanc in Switzerland. Margaretta died at the age of 36, leaving “Seven children to mourn her loss.” In the same vault are her father Benjamin (d.1805) and daughter Margaretta (d. 1840).

Sir Thomas and his son Sir Henry Rowe were both Lord Mayors of London, in 1592 and 1607 respectively. who had their own mausoleum and pews in St Augustine’s church. The family owned a great deal of land in Hackney, until all their money was lost and they sold it to the Tyssens from Holland, along with their pews. One member of the family, Owen Rowe, was a signatory to Charles I’s death warrant in 1649, and post-restoration was tried for regicide and imprisoned in the Tower of London.

“Of this parish a plumber”. Robert died aged 18, and is memorialised by his father. They were both in the booming building trade of the 18th Century and may have worked on some of Hackney’s grand Georgian houses.

Hunter was originally from Scotland and became one of the 18th century’s most travelled men, having joined Cook on early expeditions. He was the second governor of New South Wales in its early days as a colony, and is reputedly the first British man to have met an Aboriginal Australian. He has a valley named after him, from where fine Hunter Valley wine comes. He is buried with three nieces.

Was the Accomptant (accountant) General of the East India Company, which ruled British India from 1759-1857. Many employees of the company also made a fortune with their own trades in the lucrative trades India could offer such as tea, indigo dye, opium and cotton. Several other East India Company employees are also buried at St John’s.

Established the Hackney Phalanx, an educational organisation aimed at providing schools for the poor. John Watson was the Rector of Hackney from 1799 – 1839. Many Watson children are also buried in the vault – many having died as young infants.

Hackney’s pre-eminent horticulturalist in the 18th and 19th Centuries. He established a nursery along Mare Street, which boasted the biggest hot houses in Europe, collected plants and seeds form around the world and provided trees and plants for local gardens, royal parks and even botanical; gardens in Sydney. The family business closed in the 1850s. 13 members of the family, including several young children, are buried here.

Memorialised in a small plaque in the churchyard. Known as ‘Blind Fred’ he sold matches on the site for many years, and although not buried here, his memorial records him as a ‘sunny soul’ and includes a Braille inscription from the bible: ‘And this I know, where once I was blind, now I see.’

Of Huguenot descent via Ireland. Beaufort was an Admiral, famous for having invented the Beaufort Wind Scale, a system which enabled seafarers to voyage more safely, and is still used by weather forecasters and sailors today.

To find out more about the place and its people, visit Hackney Archives and Hackney Museum.

Keep up to date with Hackney parks