Vaccination and testing information and other help and support

The Council launched its Hackney Pride 365 festival to celebrate the borough’s historic, diverse and boundary-breaking LGBTQIA+ community in 2017.

The festival runs all year, every year, with community-led events – that include everything from gardening clubs to club nights, picnics to film screenings, history walks to business events – at some of Hackney’s most popular venues and outdoor spaces.

Hackney Pride 365 aims to be a call to action, bringing together the local community to inspire new collaborations. The initial programme of activity was developed from over 100 suggestions submitted by residents and activists who attended a launch event during LGBT History Month in 2017.

And that’s how Hackney Pride 365 has evolved, with a focus on improving diversity at Pride events in the borough and beyond. A ground-breaking example of this is Faggamuffin Bloc Party, the first ever sound system, run by and for queer people of colour, which made its debut as part of Hackney Carnival in 2018. While in 2019, we were delighted to welcome the UK Black Pride festival to the borough for the first time.

As well as events, a key objective was to ask the community to help address a gap in Hackney Museum’s collection of records, artefacts and first person narratives that capture the borough’s fascinating and not-to-be forgotten LGBTQIA+ history. To donate, email: hmuseum@hackney.gov.uk.

Anyone with ideas for events or projects that could be part of Hackney Pride 365, should email: jane.young@hackney.gov.uk, or call: 020 8356 2342. Keep up to date on everything that’s happening by following Hackney Pride 365 on Facebook, Instagram and Twitter.

Flying the flag (Feb and June)

In 2020, Hackney will use the inclusive rainbow flag, which features extra colours to represent transgender people and queer people of colour.

The Council first flew the rainbow flag from the top of Hackney Town Hall in 2017 and this continues to be a very visible and symbolic way of marking annual Pride and LGBT History Month celebrations. 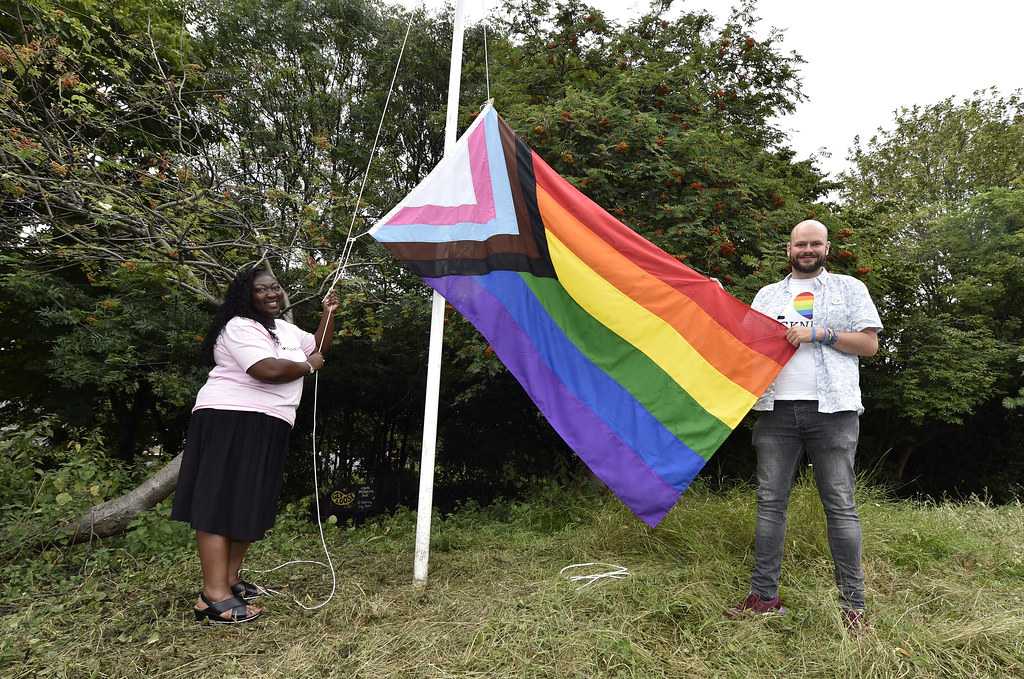 Pride in the Park picnic (May/June)

The 2020 Pride in the Park picnic has been cancelled due to Covid-19.

These annual picnics bring LGBTQIA+ families (birth, adoptive or chosen), friends and allies together for a relaxing day of free activities for children and young people including a drag queen storyteller. The event was initially held in 2017 in Haggerston Park, but found the ideal home in Stonebridge Gardens, during Dalston Children’s Festival in 2018 and 2019, and has steadily grown in popularity.

The 2020 Pride in London parade cannot take place because of the Covid-19 crisis.

However Amnesty International has announced that it will be joining forces with UK Black Pride, Stonewall and ParaPride to bring this year’s Pride celebrations completely online. Pride Inside will see artists, musicians, comedians, DJs and activists come together virtually for a series of performances, talks and workshops honouring the LGBTQIA+ community.

Council staff have marched in the annual Pride in London parade since 2013, and each year we have made our mark. The parade in central London, attracts an audience of over one million and is now one of Europe’s largest non-ticketed events.

Internationally renowned artist Stik, who is a local resident and equalities campaigner, created an iconic banner called ‘Hackney Pride’ to lead the Council’s entry in the 2016 Pride in London parade.

In 2017, we opened up our parade entry to representatives from the wider community including St Joseph’s Hospice, Rainbow Grow, Drag Syndrome, Project Indigo and The Outside Project. Our float was a waste disposal truck, an iconic symbol of local government services, decorated in rainbow flags and bunting.

The same community groups joined Hackney’s 2018 parade entry, which also featured a float overflowing with drag performers from leading LGBTQIA+ venue The Glory, in Haggerston, entertaining the crowds with their strongest loos.

In 2019, Hackney entered an electric vehicle as our Pride in London parade float to promote positive environmental, as well as equalities, messages at this high profile event.

UK Black Pride was set to return to Hackney in 2020, but will now take place online due to the Covid-19 crisis as part of Pride Inside.

In 2019, Hackney was delighted to announce that it would host Europe’s largest celebration for African, Asian, Middle Eastern, Latin American and Caribbean heritage LGBTQIA+ people as UK Black Pride moved to a bigger home in Haggerston Park for the first time.

In 2020, Faggamuffin Bloc Party has secured Arts Council England (ACE) funding to create an online space for queer, trans and intersex people of colour (QTIPOC) now that physical spaces and public gatherings of any size have been severely curtailed by Covid-19.

Hackney Pride 365 helped set up a group to represent QTIPOC in the borough. Members created and delivered Faggamuffin Bloc Party – this is believed to be the first ever sound system run by and for queer people of colour – at Hackney Carnival in 2018.

The collective went on to secure funding from ACE and in 2019 took the event to another level, culminating with a headline performance by Lady Leshurr. 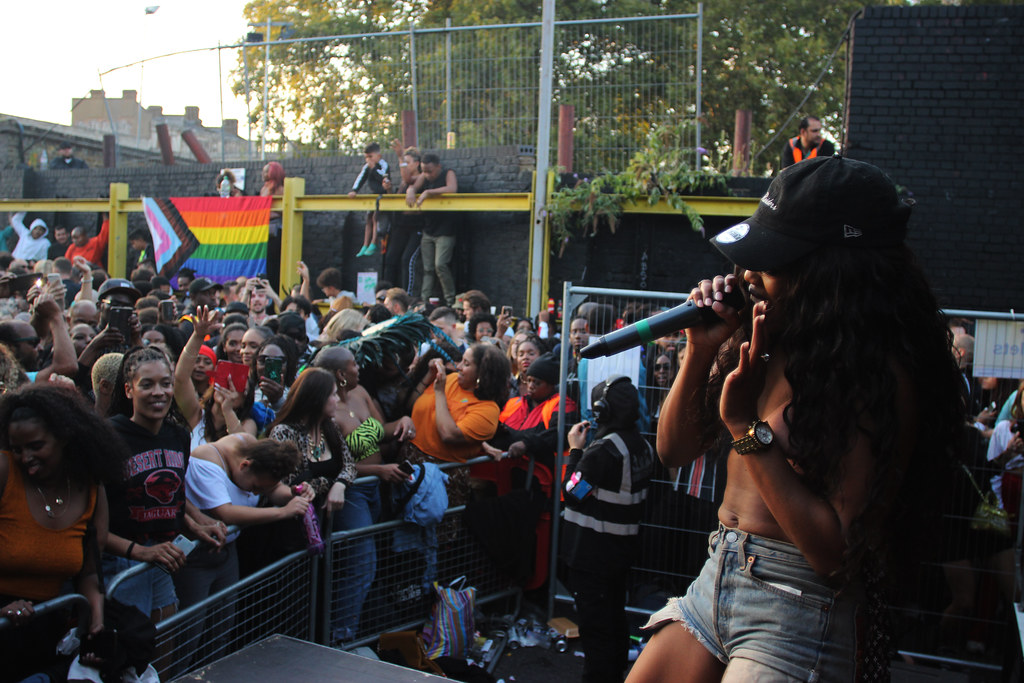 July 2019 – two traffic crossings in Hackney were given a colourful rainbow makeover as part of Pride season. They are located on the border between Hackney and Tower Hamlets, and in the heart of Shoreditch, both areas with strong historical connections to East London’s diverse and vibrant LGBTQIA+ communities.

July 2019 – in another move to promote an inclusive message about LGBTQIA+ equality across Hackney, the Council rebranded an electric van and a waste truck in an eye-catching rainbow livery.

Nov 2018 – Fringe! Film Fest took over Hackney House, in Shoreditch, for a long weekend of queer screenings and events. Fringe! programming is sexuality, gender and disability inclusive, with many free screenings and low cost tickets to prevent economic exclusion.

Too Black Too Queer

Feb 2018 – Hackney Museum produced its first LGBT History Month exhibition in 10 years. Two displays were developed by LGBTQIA+ elders group Out and About and youth group Project Indigo. The young people’s work, entitled ‘From Bedroom to Battleground’, was created with Tate artist-in-resident Liv Wynter and funded by the sale of the Stik ‘Hackney Pride’ banner at Christie’s.

Jan 2018 – young people from Project Indigo worked closely with Council officers and architects to ensure refurbished facilities at London Fields Lido were more inclusive for trans and non-binary people. Thanks to this collaboration, the new Britannia Leisure Centre, in Shoreditch, will also be built with these principles at its heart, and this work is now being used as an example of best practice by other organisations.

July 2017 – Hackney Pride 365 also partnered with The Glory, another of the borough’s leading LGBTQIA+ venues, to host a summer gala at Stoke Newington Town Hall, to mark the start of Pride weekend. The cabaret theatre style event, produced by the insanely dynamic creative duo of Jonny Woo and John Sizzle, was a showcase for LGBTQIA+ performers. It featured a huge cast of drag queens and kings, and a stunning re-creation of 1972 Emmy-award winning concert ‘Liza with a Z’.

In 2017 and 2018, Hackney Pride 365 worked with Queer Tours of London to offer guided history walks around Stoke Newington, lead by community activists, that gave residents and visitors a chance to find out more about the borough’s fascinating LGBTQIA+ history during Pride month.

In 2015, the Council launched its rainbow lanyard scheme. The simple gesture of wearing one shows we value the contributions that our LGBTQIA+ residents, service users, colleagues and elected members make to Hackney. (The lanyard comes with a booklet which contains helpful tips on how to support LGBTQIA+ people, as well as details on a range of services and organisations working with LGBTQIA+ people.) Wearing a rainbow lanyard has now become the most popular choice for staff.